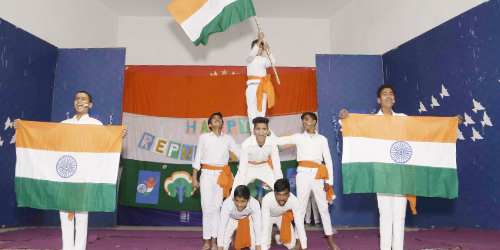 The 71st Republic day celebration commenced on 25th January at 3.00 PM with the warm welcome of the Most Honorable Chief Guest Dr. G.S. Popli the Worthy Chairman of our school and respected Sh. Raju Nagpal and Sh. Vimlesh Ahuja as Guests of Honour.  Subsequently respected Principal Sh. Ashok Kumar invited the esteemed Chief Guest to unfurl the National Flag.  The flag hoisting ceremony was followed by the National Anthem in the premises by the Patriotic and enthusiastic students.  There was March Past by NCC Cadets, which was led by Sh. Bhoora Singh NCC In-Charge and NSS, Pulse Polio and School Band which was led by Sh. R.K. Chauhan, PET to pay their tribute to the martyrs by a grand Salute.

The Principal Sh. Ashok Kumar honoured the Chief Guest and Guests of Honour.  The Patriotic aura has been sustained by the inspirational and motivational welcome speech given by Sh. Rahul Sharma TGT Natural Science.  The entire school campus turned reverberated with the rhythmic vocal performances presented by the students.  The Concept of “Unity in Diversity” was splendidly reflected in the skit performance under the guidance of Smt. Harmeet Kaur Temporary Teacher.  A Classic dance was performed very beautifully under the guidance of Sh. Neeraj Dalal, TGT Maths and Sh. Bhavneesh Solanki, TGT Maths.  A pyramid construction was commendable by the Students.  The beautiful piece of patriotic Song “Saare Jahan Se Acha” sung by the students.

There were poems recitation by Aditya and Ravit, and also a speech delivered by Om Namdev in English from Class 8th A Students.  An inspirational speech was given by the new teacher Sh. Rahul Gupta TGT Maths to invoke the patriotism among the students.

The students who won various sports competitions and NCC zonal marching competition held during the year were felicitated by our beloved Chief Guest and Guests of Honour, Pushkar Rawat, Agam Budhiraja, Sumit and Ashish students of Class XII B whom won gold in Relay Competition. He also felicitated the students who were participated in various competitions like 3000 Meter Running, Triple Jump, Javelin Throw and Kushti.  The students Aryan Yadav and Sashi Kumar Pandey who got 2nd position in Zonal marching competition of senior level in Delhi.  All the proper sports training was given for various sports competitions under the guidance of Sh. R.K. Chauhan PET and Sh. Bharat Bhushan Temporary PET Teacher.  He also felicitated Dr. Pawan Kumar who was awarded appreciation certificate from Delhi Sanskrit Academy.  The Chief Guest addressed the audience with his inspiring speech.  He motivated the students to reach their goals with determination.  He advised the students not to be addicted through mobile phones, video games or social media.  He also welcomed the 14 newly appointed Teachers and appreciated the office Staff for their dedicated work throughout the Recruitment Process.  Finally he concluded his speech by mentioning the significance of the Day.

The Guests of Honour Raju Nagpal and Vimlesh Ahuja in their address highlighted the significance of the day and made the children aware that the future of our Country lies in their hands.

The republic day celebration was concluded with heartfelt Vote of Thanks given by the Principal Sh. Ashok Kumar.